skip to main | skip to sidebar

At the moment, dev world is full of rave about Node and server side JavaScript (databases like MongoDB and the likes). There hasn't been a better time for front-end and JS developers. On the first look - it appears great, promising and exciting.

On the down side, as with most upcoming technologies, there isn't enough security analysis, consideration and advisory to reference and understand gotchas with server side JS. Nothing wrong with that - it's functions, coolness and innovation that brings business and not security (history/economics is a testimony).

In this post, I will share my security view point as I see it. This could be an ever growing list and the kind of things you can achieve with server side JavaScript - there is no early end to this.

Let's start with the good things. Node inherently introduces a great security benefit over
traditional server side programming paradigms and that is "secure by default" (reminds me of my NetBSD days). As highlighted in white below, your create your web server - a bare bone types and not a full blown with bells and whistles like Apache. 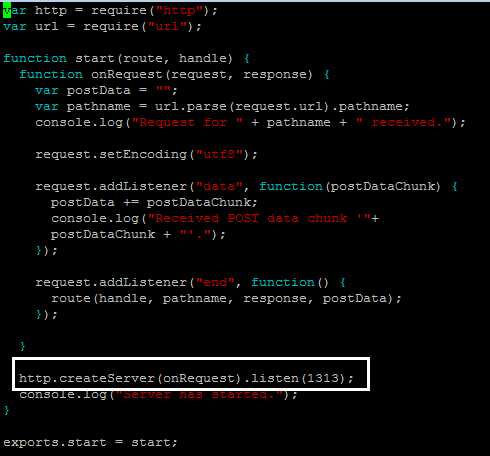 And then chose and pick what you want. Like define what your doc root will have - unlike anything and everything in a traditional web doc root. Like highlighted in yellow below - that is what your web server will respond to for requests. Rest needs to be caught by a 404.

Summarizing - your web server isn't configured and capable more than what you want it to be unlike Apache, Tomcat or IIS. I recall countless instances of Tomcat compromises due to default admin and manager apps that come installed and running with default passwords. And IIS getting exploited with WebDAV buffer overflow when in reality the web app never really needed it in first place. Typically web servers sent a false sense of security where developers mostly considered them to be secure. And we all know, more features, bigger the attack surface. Bigger the attack surface more chances of things going wrong. And something that can go wrong will go wrong!

On the flip side - the bad parts. Node carries over the known dangerous JavaScript APIs like the eval that can be trivially exploited to do server side injection (that were earlier only client side exploits like XSS). 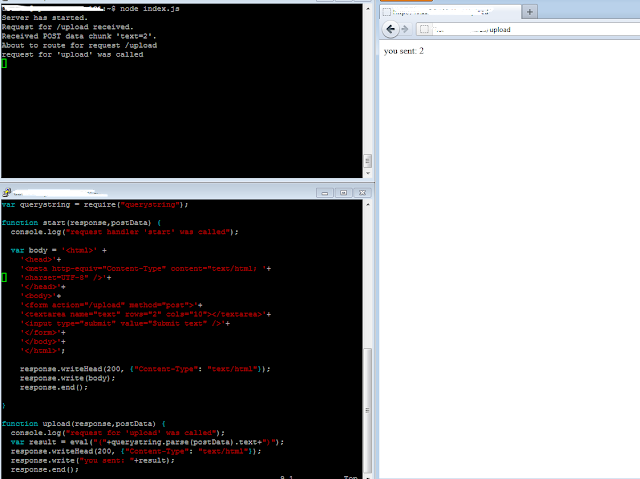 Abusing eval on client side would result an XSS but on server-side it induces a server side injection alike SQL Injection as seen below where we inject an HTTP response. 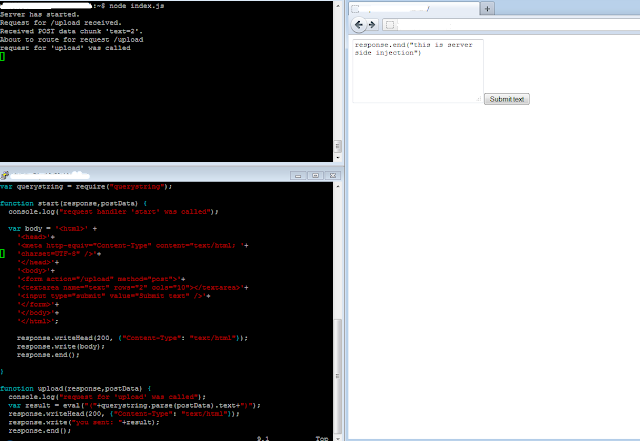 The screenshot below highlights execution of server side injection. 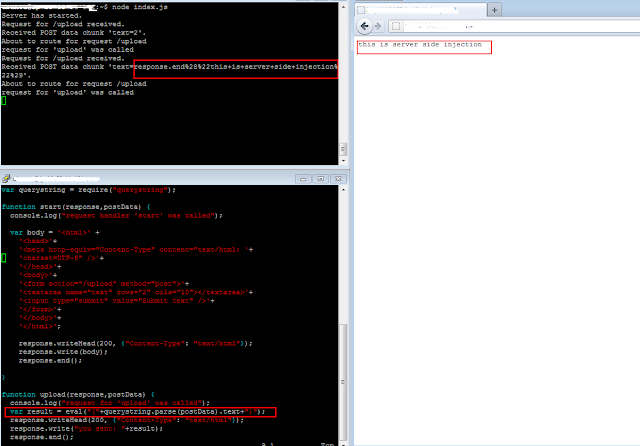 To best of my knowledge, this issue was first brought to notice in context of Node by Bryan Sullivan at BlackHat. Not a brand new exploit. We know eval is evil. What is worth note here is most developers wouldn't imagine this happening at the first go. From that perspective this exploit vector server side is novel.

What do I see ugly? The ugly parts are the ones that introduce new attack vectors. There should have been default protection built-in ideally. The event driven single threaded programming model is not what web developers are used to. Node is single threaded and a simple error can create a denial of service condition as highlighted in the screenshot below. 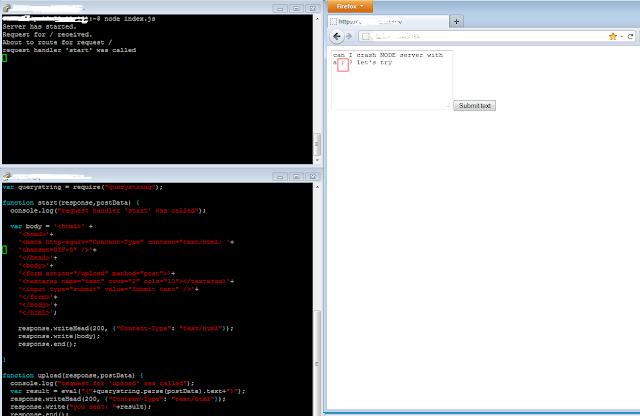 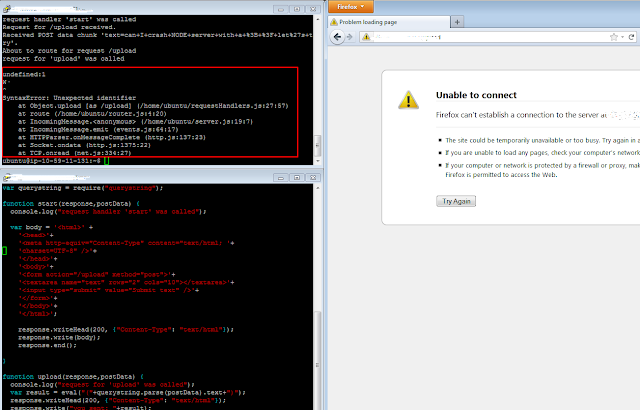 Similar DoS condition would result when messing with global variables - intentionally or unintentionally. Above scenarios are quite likely considering JS developers are usually quite used to errors. I see thousands of live sites day in and out that have a number of errors showing up in Firebug console and running absolutely ok which will not be the case as you go server side.

Another  ugly part is that web developers are not quite used to service permissioning. Web developers had it outsourced to Apache/IIS, would now end up running their node services as root, that earlier ran as nobody.

A 1000 feet high apple to apple comparison between let's say PHP and Node tells me - it took a step back in security. At least, you would come to expect a sanitization/validation library for a new programming language, if not a fancy new auto-sanitization module like PHP Filter (aah yes - Filter isn't a complete auto sanitization in PHP but you get what I mean).

An honest look and I feel node isn't meant to be used as is.  With a strong framework, is how it should be used. There are many in the fray right now - Express probably is the most widely used. I haven't tried it yet but from what I see, security in node is a work in progress.

Being a Yahoo, how can I end without not mentioning Yahoo Cocktails. Haven't played around with it yet, but this is something I have super high hopes with. The engineers I met there are fabulous. Come Q1 2012 it would be there for all of us to play around. Yahoo is a great company, the best  I have worked for - no doubt I would love to see it scoring high.

Learning more and more of Node, I keep reminding myself "Node is powerful, and with power comes responsibility".